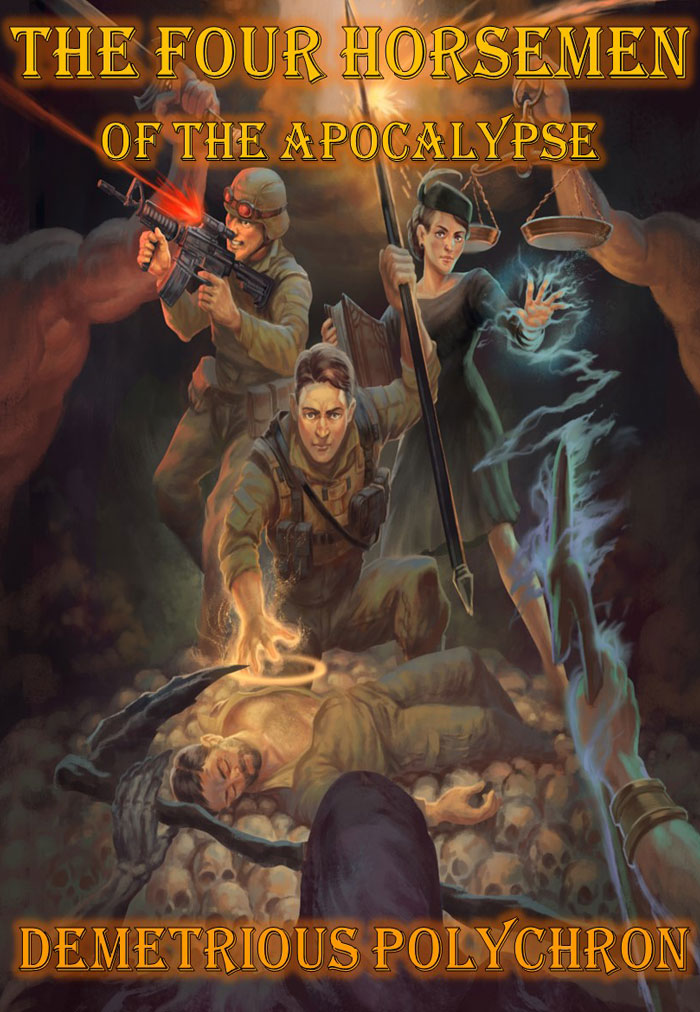 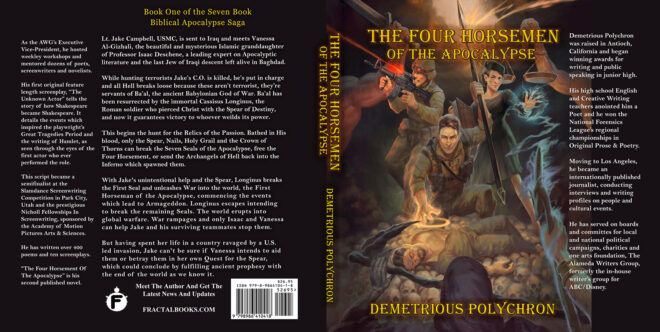 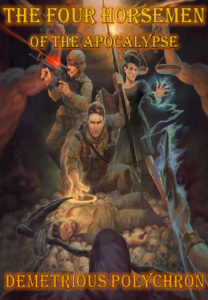 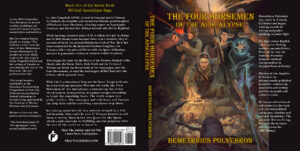 The Four Horsemen
Of The Apocalypse

Imprisoned on an island in the Mediterranean, John of Patmos receives divine Revelations, but their true meaning remains lost for centuries. Two thousand years later Biblical Literalism sweeps America, but not even the most devout Fundamentalist can imagine how every word of the Revelations can possibly be true. As global cataclysms make it clear the End Times have come, the first stone is thrown in the war-torn Middle East and lands at the feet of a U.S. Marine.

Lt. Jake Campbell, USMC, is sent to Iraq and meets Vanessa Al-Ghazali, the beautiful and mysterious Islamic granddaughter of Professor Isaac Deschene, a world-leading expert on Apocalyptic literature and the last Jew of Iraqi descent left alive in Baghdad.

While fighting terrorist Jake’s C.O. is killed. He’s put in charge, never having been in charge of anything, and all Hell breaks loose. Because these aren’t terrorist, they’re the servants of Ba’al, the ancient Babylonian God of War. He’s been resurrected by Cassius Longinus, the Roman soldier who pierced Christ’s side with the Spear of Destiny, and now it guarantees victory to whomever wields its power.

This begins the hunt for the Relics of the Passion. Bathed in His blood, only the Holy Grail, Spear, Nails and the Crown of Thorns can break the Seven Seals, release the Four Horsemen or send the Archangels of Hell back into the Inferno that spawned them.

With Jake’s unintentional help and the Spear, Longinus breaks the First Seal and unleashes War into the world, the First Horsemen of the Apocalypse, commencing events which lead to Armageddon. Longinus escapes intending the break the remaining Seals. The world erupts into global warfare. War rampages and only Isaac and Vanessa can help Jake and his surviving teammates stop them.

But having spent her life in a country ravaged by a U.S. led invasion, Jake can’t be sure if Vanessa intends to aid them or betray them in her own quest for the Spear, which could conclude by fulfilling ancient prophesy with the end of the world as we know it.